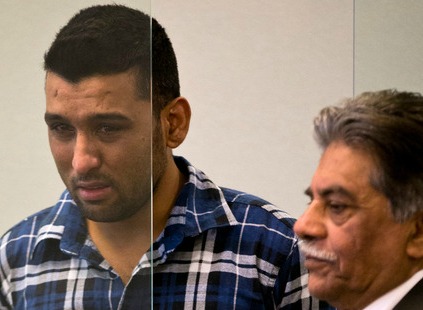 When his wife left him, Mandeep Singh bought knives and waited patiently in the foyer of her school until she finished her exam.

As soon as 22-year-old Parmita Rani walked out of the Queen St premises, he stabbed her to death.

Her friend Parminder Sandhu, 22, wrestled the knife from the defendant and rushed over to Ms Rani, who was bleeding to death from a wound that had severed an artery, a vein and her airway.

While he bent over her, Singh pulled another knife out and viciously attacked Sandhu – the man he believed his wife had left him for.

The knife wound punctured his lung and it could have been worse had it not been for a member of the public who intervened and restrained the defendant.

Ms Rani died at the scene.

Singh appeared in the High Court at Auckland this afternoon where he was jailed for life with a minimum of 13 years before the chance of parole.

Last month he pleaded guilty to a charge of murder and one of attempted murder.

Today, as was the case when admitting the charges, Singh sobbed throughout the hearing.

Justice Mark Woolford accepted the 29-year-old was sad about killing his wife but said “your primary focus has been on yourself”.

A pre-sentence report called Singh “highly protective and controlling of Ms Rani’s movements and associations with others”.

He argued his wife had provoked his actions by leaving him for another man but Justice Woolford totally rejected that as a mitigating factor.

“You saw yourself as having some sort of rights over your wife. As a community, we can’t allow this to happen,” he said.

Ms Rani left her husband the day before the May incident, prompting him to call one of her friends and Sandhu.

He told both of them that he had bought five knives from the $2 shop, had drunk beer and was going to kill his wife.

The court heard he had also written down his intentions in a letter later found at his house.

Two of Ms Rani’s older sisters, who had raised her, came over from India for the sentencing and wept quietly in the public gallery.

Singh’s lawyer Adam Couchman tendered references to the court, which he said showed his client’s actions were completely out of character.

“He did not have anyone he felt able to talk to about these problems and they came to a volcanic eruption on the day in question,” Mr Couchman said.

But Crown prosecutor Robin McCoubrey said there was significant premeditation and it was far from “a fit of rage”.

“Whether your wife formed a friendship with another man is irrelevant. Nothing she did caused your actions,” he said.

Singh will be deported upon completion of his sentence.